Whats wrong with my oil setup

I have just built my first oil setup: 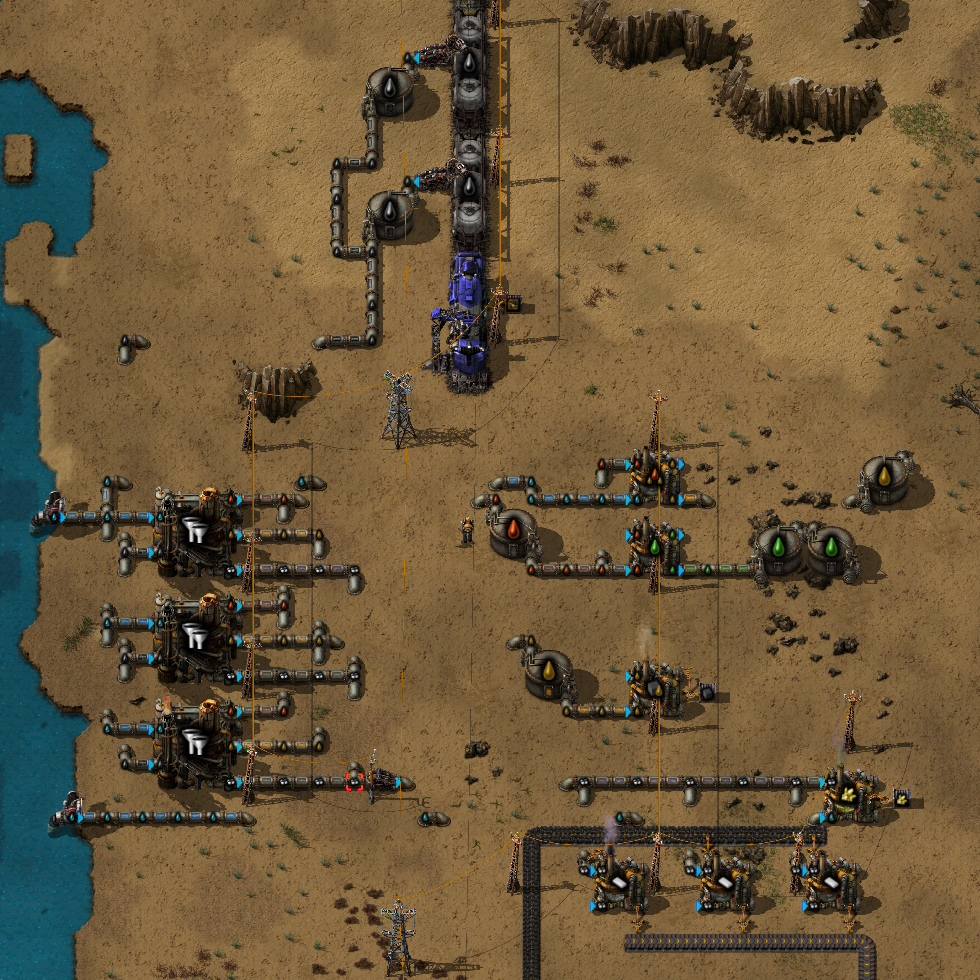 But it doesnt seem to work properly

Only the solid fuel chemical plant is running regularly, everything else just starts and stops sporadically.
Should I place more pumps?
Should I only input to a single chemical plant from a refinery output?
What am I doing wrong here!?

Thanks for your help!

In order to elaborate on the two answers a bit more:

a refinery must be able to produce *all three* products or it will stop working. If one of the products is jammed as tanks are completely full, then the refinery will not produce anything, even when the other two products are completely empty (e.g. see https://wiki.factorio.com/Oil_refinery )

I typically set my oil processing up such that Heavy Oil gets shunted into one Tank, Light Oil into another, and Petroleum Gas into a third.

From the LO tank, an always-on Pump that sends LO to Solid Fuel. 0.17 I’ll also use this line to connect for Rocket Fuel. A second Pump sends the LO out to the LO->PG crackers, and just like the HO Pump, this Pump is connected to its feed tank by wire and set to only run when I have more than 20000 LO in that tank.

PG has enough uses on its own that its not normally needed, but a second Solid Fuel section may be useful, again operating off of a circuit controlled Pump, in case PG demand drops below that of the HO (Lube) or LO.

Maybe you thought you dont need light oil cracking because you are producing solid fuel. But you arent using oil products in perfect ratios. Your refineries often produce more than you consume.Consumption has its ups and downs. And you dont need enough solid fuel at this stage to use up all your light oil.
Thats why oil processing is the perfect place to use circuit conditions. Pumps act as circuit controlled valves. So you can read a single tank (even when you have multiple connected tanks you only need one) and then run pumps accordingly.

But there are several ways to do it. Some people always crack what they have most of (LO > HO for example). But I like a bit of LO and HO in storage for flamethrower fuel and ammo

Only the solid fuel chemical plant is running regularly, everything else just starts and stops sporadically.

You can diagnose the cause of the problem when you hover a machine on the right pannel, there is a status : under the health, it can tell you why the machines stops when they do, for example fluid production overload or fluid production shortage. And you can check the quantity inside the pipes or tanks to know which particular liquid.

Here the light oil must be full so the refineries would say fluid production overload ( of light oil) and the other machines that needs petroleum or heavy oil would say fluid production shortage. And it gets a little less full when the chemical plant finishes one solid fuel and prepare the next block, so the refineries starts working, and stops after very short time until there is again enough room in the pipes/tanks to avoid the production overload.

Pumps act as one way valve that are turned on (pumping) by default but can also be turned off( cutting the flow totally) with circuit.

Are you running version 0.16 or the experimental 0.17 ? im asking because the latest experimental version introduced a change in the oil processing, on this particular aspect, it might be interesting to know.

What I have is normally pumps from the refinery area to a pool, then priority chemplants feed off that priority pool, and if the pool fills up any excess being used in trickledown conversion.

Heavy Oil from refinery:> pump to HO common silo
HO common silo: > pump to Lubricant(makes as much as the system will take)
whatever is left over in the silo is converted to Light Oil

Light Oil from refinery + extra from above :> pump to LO common silo
LO common silo: > pump to Solid Fuel (Make as much as the system can take)
whatever is left over converted to Gas

Thanks everyone for the inputs, it really helped me understand the game mechanics better.
I have enhanced my setup, it is not yet optimal, but definitely much better than what it was before, as you can see in the picture below 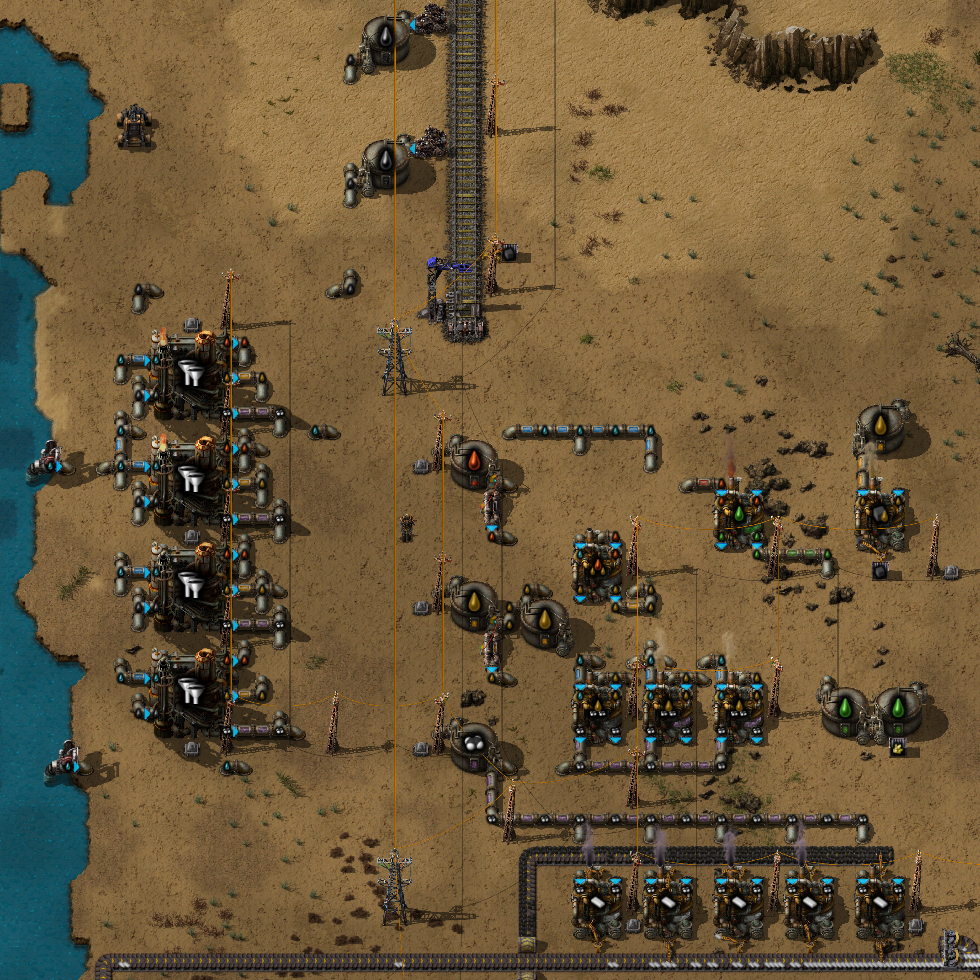 My circuit logic is still very basic (crack to next fluid if storage is almost full) and I still have to increase my PG usage, as my belt of plastic is full and not being consumed very fast (all the buffer chests are full too). I plan to start a battery production line that should take care of that.

I also have trouble moving storage tanks around, what is the best solution there?
Barrel the fluid?
Just put down a new storage tank, setup a pump and pipe to transfer from the old to the new storage?

Thanks again for the help, great community here!

I also have trouble moving storage tanks around, what is the best solution there?
Barrel the fluid?
Just put down a new storage tank, setup a pump and pipe to transfer from the old to the new storage?

Depends on the distance.
Pumping the fluid to the new tank is the easiest and fastest option.
To move a full tank you need 500 barrels, or you keep running between the two tanks, its tendious.

I suggest having petroleum gas to solid fuel machines, on a pump that runs if the PG is too high. That way theres always a way to dispose of excess of oil: heavy to light (need enough crackers), light to petroleum (need crackers), petroleum to fuel blocks. Petroleum to fuel blocks is woefully inefficient (heavy is best converted to light and then made into blocks, PG has many other uses while light does not). Unfortunately dumping PG into plastic has its own issues. Requires coal, can easily get backed up as you consume and consume chips, not to mention red chips are the slowest chips in general, and only consume 20 PG in 6 seconds.

If youre running a larger set-up and arent doing rockets, put down a bunch of tanks and just pick them up later. The more oil production you make, the easier it is to tilt off balance, and oil doesnt get consumed as fast as youd think (10-20 spots of 10 can last your growth forever with mining productivity and speed modules). You use an even smaller ratio of oil to product if you hit the beacon stage of production. Thats many hours in, however. I was running at least 25 oil refineries with prod 3s constantly before I learned about beacons, and still wasnt running all the jacks I put down. I think I was also using PG for fuel blocks because I didnt realize how bad they were at the time lol.

Additionally, if youre not concerned about biters, use boilers and steam engines to burn off the fuel blocks. When running on nuclear, steam engines and turbines have the same rank, so theyll both get used. On solar, the steam engines will kick on before the accumulators. Either way you can dispose of the fuel quite rapidly if you spare the materials and space. 100 MW for example is 8 1/3 fuel blocks per second.

Its generally not needed to waste PG, but if you DO need the fuel block production (power or rockets), PG WILL block you.

I have mods! I guess!
Link

Its generally not needed to waste PG, but if you DO need the fuel block production (power or rockets), PG WILL block you.

Its also possible to do a self-contained setup for solid fuel / rocket fuel, so it doesnt interact with the plastic consumption. Yeah, youre wasting some PG technically, but with productivity modules everywhere it doesnt really matter much. Meanwhile there are less complications.