5 Trending Reddit Stocks To Watch In The Stock Market Now

If you told me investors were looking for the best Reddit stocks to buy over a year ago, I would not have believed you. Nonetheless, the stock market today continues to see the hype train for these social media-fueled companies press forward. Whether you call it Reddit stocks or meme stocks, one thing is sure. These are stocks that see explosive gains mostly due to hype from retail investors online. For the most part, institutional investors were quick to dismiss the sector as being purely speculative. However, retail investors seem to see more value beyond the current trading prices of these stocks.

For example, we could look at the first company that got the meme trade rolling, GameStop (NYSE: GME). Initially, GME stock was being shorted on account of its brick-and-mortar operations facing immense pressure earlier in the pandemic. Thanks to Reddit traders, the company’s shares are now posting year-to-date gains of over 800%.

Moreover, GameStop is now pivoting towards the e-commerce space, continuously expanding its already impressive e-commerce ecosystem, by offering same-day deliveries and great deals for its products. This is clear as it continues to beef up its fulfillment network across the U.S. At the same time, other names in the Reddit trade include Palantir (NYSE: PLTR) that posted strong financials in its second-quarter fiscal earlier today. With no shortage of activity in the space now, would these Reddit stocks be top picks in the stock market now?

Top Reddit Stocks To Buy [Or Sell] This Month

Clover Health is a health care stock that operates a next-generation Medicare Advantage insurer. It leverages its flagship software platform, the Clover Assistant, to provide seniors in the U.S. with highly affordable health care plans. The company also empowers physicians with data-driven, personalized insights at the point of care through its platform, improving clinical decision-making and outcomes.

The company reported a strong second-quarter on Wednesday. Notably, total revenue for the quarter was $412 million, up by 140% year-over-year. Clover Health says that its Clover Assistant is on track to managing over $1 billion of annualized revenue. It also has ambitious goals to maintain an aggressive growth trajectory while pursuing its mission to improve the quality of life of its users by making great health care available and affordable to all American seniors. Given the impressive financials, will you consider adding CLOV stock to your radar? 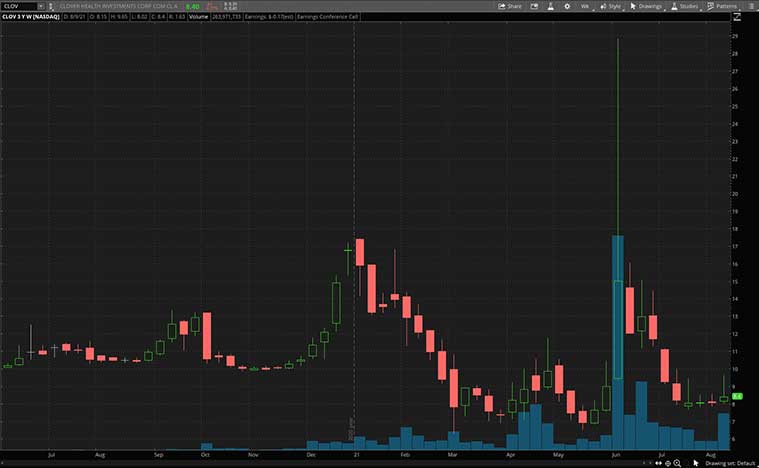 Next on this list, we have Tesla, an electric vehicle (EV) and clean energy company with headquarters in California. The company designs and manufactures its EVs, energy generation, and storage systems for consumers all around the world. It also had one of the highest sales in the plug-in and battery electric passenger car segments in 2020. Furthermore, the company’s Tesla Energy is one of the largest global suppliers of battery energy storage systems, with 3 gigawatt-hours installed in 2020. TSLA stock currently trades at $720.25 as of 12:58 p.m. ET and has more than doubled in valuation in the past year.

In late July, the company reported a record second quarter. Firstly, it delivered over 200,000 vehicles despite supply chain challenges. Secondly, the company reported a record GAAP net income of $1 billion for the quarter. It also ended the quarter with $16.2 billion in cash and cash equivalents. Tesla has also successfully launched Tesla Vision in the quarter, bringing it a step closer to solving full autonomy. Given this piece of news, will you consider adding TSLA stock to your late 2021 watchlist? 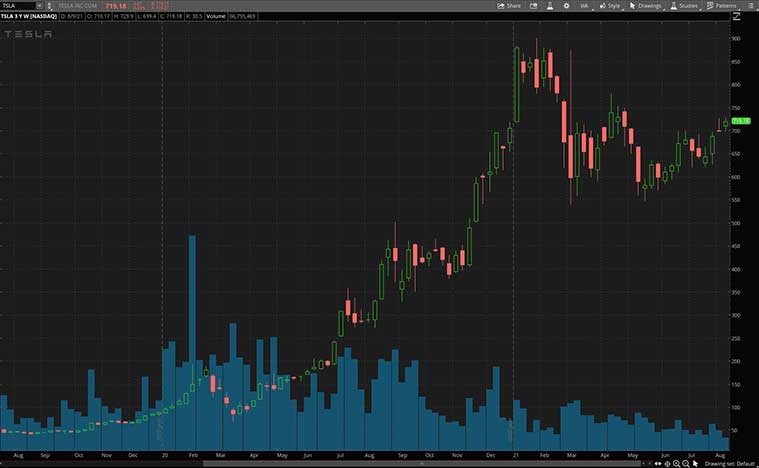 Advanced Micro Devices (AMD) is a multinational semiconductor company that is based in California. For over 50 years, the company has driven innovation in high-performing computing, graphics, and visualization technologies. Its products and services are used by the gaming and data center industries among others. The company also boasts hundreds of millions of consumers and many leading Fortune 500 businesses that rely on its technology. AMD stock currently trades at $110.38 as of 12:59 p.m. ET.

On July 27, 2021, the company also reported its second-quarter financials. Diving in, it posted a revenue increase of 99% year-over-year at $3.85 billion. Operating income for the quarter was $831 million while net income was $710 million, or diluted earnings per share of $0.58. Its revenue increase was driven by higher revenue in both its Computing and Graphics segment and Enterprise and Embedded and Semi-custom segment. With that being said, don’t you think AMD stock is a top Reddit stock to watch right now? 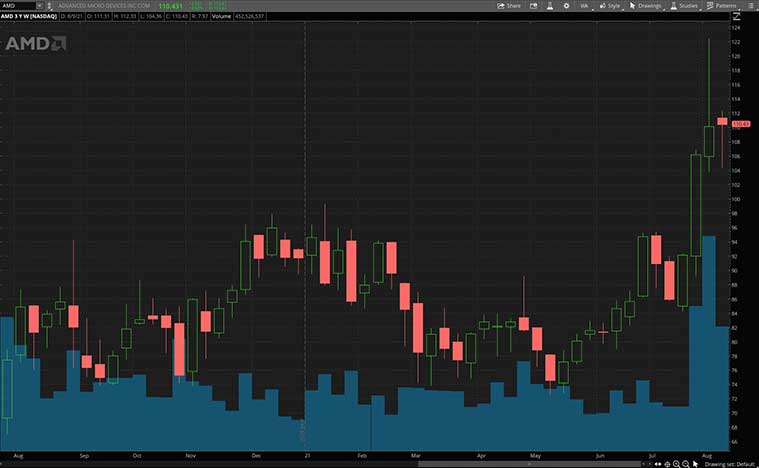 Following that, we will be taking a look at AMC Entertainment. For the most part, investors would be familiar with AMC stock today. After all, it is another one of the major names in the Reddit stock trade. For the uninitiated, AMC is one of, if not the largest player in the movie exhibition industry worldwide. In terms of scale, the company boasts a network of 950 theatres consisting of 10,500 screens across the globe.

As it stands, the company’s shares currently trade at $34.24 as of 1:04 p.m. ET. This would be after gains of over a whopping 1,400% year-to-date. The real question is, can AMC maintain its current momentum moving forward? Well, if anything, CEO Adam Aron seems to believe so. After reporting narrower-than-expected losses in its second-quarter fiscal last week, AMC ended the quarter with $2 billion in liquidity. According to Aron, AMC is now “playing on offense”. This is evident from its recent spree of acquisitions spanning two of the highest-grossing theaters in Los Angeles among other locations. Could all this make AMC stock worth adding to your watchlist for you? 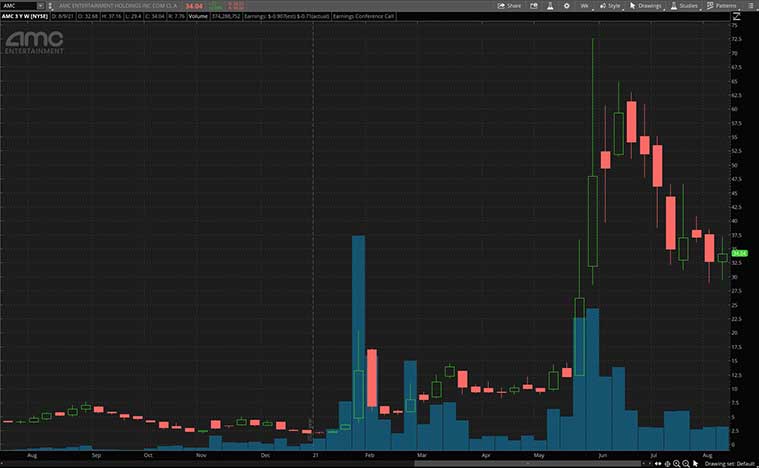 Diving right into it, HOOD stock is currently looking at gains of over 40% since its initial public offering on July 29. While this is great for the company, Robinhood continues to bolster its operations now. As of earlier this week, the company is now planning to acquire Say Technologies, an investor relations software firm. Through the $140 million acquisition, Robinhood would be refining its investor interaction experiences. Ideally, all this could potentially give HOOD stock more room to run moving forward. Would you agree? 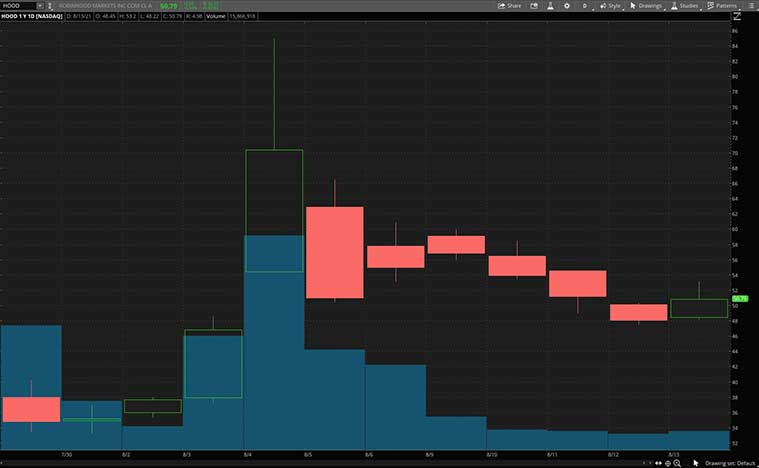